Back to News Room 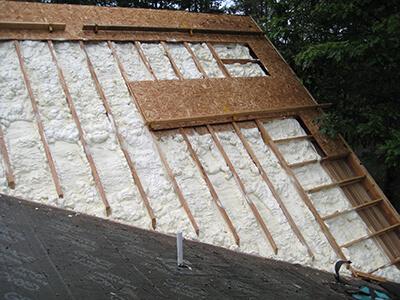 Kulp’s of Stratford, Insulation Division, LLC, recently installed Icynene spray foam into the cathedral ceilings of the Robert and Anita Kendall home in Three Lakes, Wisconsin. Their contractor, Steve Lawonn, who had had a positive experience with Kulp’s insulation services in the past, contacted Kulp’s Salesman Carlin Overholt during the long and snowy winter of 2008. The Kendall home was experiencing some very significant ice damming at the roof edges, as evidenced by the large icicles, some hanging over halfway from the roof edge to the ground. The backed-up meltwater leaked into the house, causing many water stains and inconvenience to the Kendall’s.

In most cases, ice damming on a roof is caused by a combination of (1) large amounts of snow, (2) low temperatures that keep snow from melting quickly, and (3) heat loss through the roof from the interior heated portion of the building. Some of the snow melts from the bottom side of the snow blanket, and the meltwater runs down between the shingles and the snow toward the roof edge, where it refreezes when it reaches the overhang portion of the roof since there is no heat coming through the roof at that point. Most ice damming can be eliminated by eliminating heat loss through the use of air-impermeable insulation.

In July of 2008, crews from Kulp’s removed the shingles and the roof deck from the Kendall home, one large section at a time, removed the existing fiberglass batts from between the rafters, and sprayed Icynene foam in its place, carefully sealing up the valleys and skylight areas, where condensation problems are often worst. Then the roof deck was replaced and new shingles installed, for a much tighter roof assembly than the original construction. This project was a challenging one, but it was one more spray foam insulation retrofit to add to a growing list that Kulp’s of Stratford has completed in the last seven years. Icynene is the leading light-density, open-cell spray foam insulation, with an environmentally friendly formulation that hasn’t changed for more than 20 years.